Caught in the Act - Matt & Eric 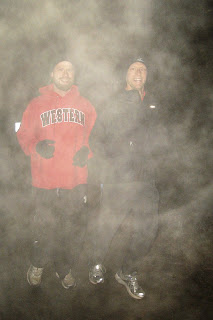 Matt D. & Eric P.
6:15-ish a.m.
Tuesday, Dec. 30, 2008
I think the fog makes this such a cool photo!
It was taken on the Swan Creek Greenway just after we had reached Hwy. 72 and turned back. It was still quite dark out so I wasn't even aware we were running in fog until the flash captured it wafting up off the creek.
Great run, guys!
Thanks for letting me join you!
Posted by W.Q. Duck at 6:54 AM