Nash and I joined the Limestone training run at the track Monday evening but since I'm much slower than the other folks, we trailed way behind. Then, once we all got on the new section of the greenway that goes all the way to Hwy 72, we pretty much had to turn back anyway so we waited around and took some photos of the gang after they made their turnaround.
The new section of the trail is going to be super nice when it's finished. Right now, it's finished enough to use on foot but there's one bridge that can't yet be biked or strollered across and another section of big ol' humongous rocks (and I don't mean gravel, either, this is a patch of tiny boulders I'm talkin' 'bout) that likewise isn't passable with the stroller. 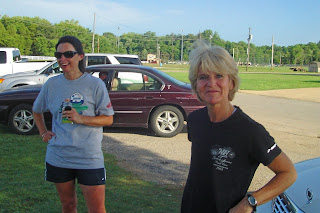 Janet & Whitney, above, and Phillip, Glen & Dale, below, chit-chat before taking off. 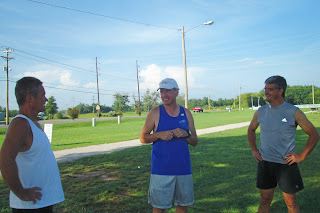 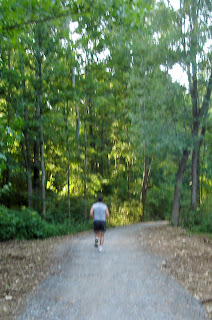 Dale on the trail. He ended up finishing way ahead of everyone else. (As evidenced by this photo - the best I could do considering his speed!) Go Dale!

Whitney, Glen & Phillip enjoy the shade of the new greenway. 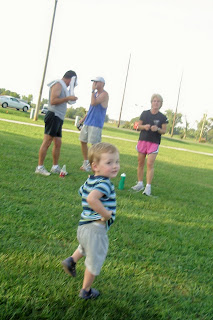 Nash shows off his developing one-miler expertise while the grown-ups cool down, postrun.
Posted by W.Q. Duck at 2:05 PM

Thanks for your support of the runners in Limestone county